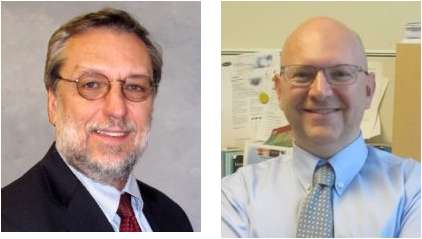 A new study from Dr. John DiGiovanni, professor of pharmacology and toxicology, and his colleague, Dr. Stefano Tiziani, assistant professor of nutritional sciences, identifies several natural compounds found in food, including turmeric, apple peels and red grapes, as key ingredients that could thwart the growth of prostate cancer, the most common cancer afflicting U.S. men, except for skin cancer and the third leading cause of cancer related death in men.

Their findings were published online this week in npj Precision Oncology. The paper outlines the study that uses a novel analytical approach to screen numerous plant-based chemicals to look for synergistic combinations instead of testing a single agent as many studies do.

“For some time, scientists have suspected that increased consumption of natural compounds may play a role in starving cancer cells and potentially preventing cancer formation,” said DiGiovanni, one of the key researchers on the project.  “Our study illustrates that finding the most effective combination of those bioactive agents greatly increases the effectiveness.”

“After screening a natural compound library, we developed an unbiased look at combinations of nutrients that have a better effect on prostate cancer than existing drugs,” said Tiziani.   “The beauty of this study is that we were able to inhibit tumor growth in mice without toxicity using several combinations of natural compounds identified in the screen.”

During the past decade, some cancer research has highlighted the potential therapies found in plants, including chemicals found in foods such as turmeric, apple peels and green tea. These compounds minimize one of the risk factors for cancer, inflammation within the body. People who have chronic inflammation because of chronic infection, autoimmune disease or conditions such as obesity have a higher cancer risk because of damage to normal cells.

The researchers first tested 142 natural compounds on mouse and human prostate cancer cell lines to see which inhibited cancer cell growth when administered alone or in combination with another nutrient. The most promising active ingredients were then tested in an animal model on tumor growth: ursolic acid, a waxy natural chemical found in apple peels and rosemary; curcumin, the bright yellow plant compound in turmeric; and resveratrol, a natural compound common to red grapes or berries.

“These nutrients have potential anti-cancer properties by themselves and are readily available,” says Tiziani. “We only need to combine them together to achieve a more effective inhibition of prostate cancer growth”

“The findings are very encouraging,” DiGiovanni continued. “For many patients, the more traditional cancer treatments have sometimes felt as debilitating as the disease they were battling.  This approach to battling cancer cells appears to lead to less harsh side effects while still being very effective at inhibiting tumor growth.”

The new research paper also demonstrates how the plant-based chemicals work together. Combining ursolic acid with either curcumin or resveratrol prevents cancer cells from acquiring something that they need to grow, the amino acid glutamine. This novel and unexpected finding: blocking the uptake of a nutrient needed by prostate cancer cells with nutrients that are commonly in the human diet, could lead this research group to find other natural compound combinations that could more effectively starve cancer cells of this and other nutrients in the future.

Funders of this research include that National Institutes of Health and the University of Texas System. The experiment was designed, analyzed and written up with coauthors Alessia Lodi and Achinto Saha, both from UT Austin. Additional authors include Xiyuan Lu, Bo Wang, Enrique Sentandreu, Meghan Collins, also from UT Austin; as well as Mikhail Kolonin of The Brown Foundation Institute of Molecular Medicine at the University of Texas Health Science Center in Houston.