Mukhopadhyay named to NIH ONES award 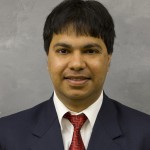 Dr. Somshuvra Mukhopadhyay, assistant professor of pharmacology and toxicology, is one of five exceptional early career scientists selected to receive grants from the National Institute of Environmental Health Sciences (NIEHS).  The awards are part of the Outstanding New Environmental Scientists (ONES) program.

Mukhopadhyay’s five-year award of $2.7 million (2016-2020) will advance his studies into the process through which cells remove the toxin manganese that can cause a syndrome similar to Parkinson’s disease.  The work is an extension of a study that he published last year.  (Read more about the Parkinson’s research study.)

“A ONES award gives promising environmental health scientists the opportunity to pursue innovative ideas early in their careers,” said Linda Birnbaum, director of NIEHS.  “This is one of the best tools we have to retain their talent for research.”

“Dr. Mukhopadhyay is an outstanding young scientist, and we are extremely excited about him receiving the ONES award,” said Dr. M. Lynn Crismon, dean of the College of Pharmacy. “He has already performed cutting edge research examining manganese utilization and the production of a Parkinson-like syndrome.  This early innovator’s development award will be a springboard that, undoubtedly, will advance his career.”

The 2016 ONES awardees will study substances in our environment, such as arsenic, dioxins, and DDT; how these chemicals cause harm, including heart problems, insulin resistance, and allergies; and how they are removed from the body through protective mechanisms.

In addition to the ONES award, Mukhopadhyay’s research received a “Pathway to Independene K99/ROO” grant from NIEHS (2011-2016).

“Support from the NIEHS through these two awards was instrumental in allowing me to transition to independence from a postdoctoral position,” said Mukhopadhyay. “The funding allowed me to focus on studying gene-environment interactions in parkinsonism.”

Mukhopadhyay is the only UT Austin faculty members among the announced awardees.  Others include researchers at the University of Alabama at Birmingham, the University of California (Davis), Harvard Medical School, and Michigan State University.